The Importance of A Rear Wing For the MINI Cooper

The modern MINI Cooper is a fantastic handling car. It’s lite weight and compact and comes equipped with a very capable suspension. That said, there is still room for improvement. Under extreme lateral maneuvers, the rear end of the MINI can lose traction and start sliding. The best way to fix this problem is to add grip to the rear of the car. Adding grip is not easy. The simplest way is to add vertical load to the tires either by increased rear weight or aerodynamic down force. Adding weight is not what you want to do to a race car. So what do you do?

The solution is to add rear down force by installing a properly designed rear wing. The wing works like an inverted airplane wing. By making the shape of the bottom of the wing different than the top, we can generate down pressure. While one side is flat, the other has a curve to it. As the air travels over the wing, it speeds up as it travels along the longer bottom surface and generates a low pressure area while the top flow generates a higher pressure area.  This creates down force on the rear of the car and on the rear tires without the negative effects of a weight penalty. The faster you go the more down force is generated. More down force produces more grip so it is a win/win situation. 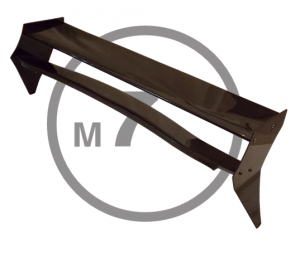 Not all rear wings are created equally.  Some are purely cosmetic and create very little down force, and in many cases slow you down and kill your MPG by creating tremendous amounts of drag. By far the best rear wing for the MINI Cooper is made by M7 Tuning. They offer a street/strip C-Wing and an all-out race version called the C-Wing Extreme.  Both are fully adjustable so you can trim them for maximum down force or minimum drag or a combination of the two. For more info on the wings offered by M7 Tuning visit them at www.M7Tuning.com.

Besides being totally functional, the M7 Tuning C-Wing looks totally cool and will set your MINI apart from the other millions of MINI’s on the road. Take the handling of your MINI Cooper to a whole new level with a rear wing!

Get in touch with us to learn how our brands are driving the future of ecommerce in the automotive aftermarket.