Increase the Power In Your Supercharged MINI With A Pulley Upgrade

If you’re one of the lucky ones that own a supercharged 2002 – 2006 MINI Cooper you know the joys of driving a small car with lots of power. But like most gear heads, you are never satisfied with the factory horse power rating. If you’re looking for an inexpensive and easy-to-install solution for more power, we have a recommendation for you; a smaller diameter supercharger pulley. 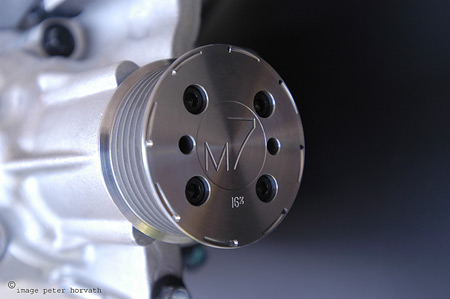 So you may be asking yourself; how does a smaller pulley increase horse power? The answer is pretty simple. The pulley at the crank (the driving pulley) is bigger than the top supercharger pulley (the driven pulley). Therefore the top pulley will turn “X” more times for every one ration of the crank pulley. The smaller the supercharger pulley, the quicker it will turn in relationship to the engine rpm’s.  In short, the more rapid turning of the supercharger will create more boost and that translated directly to more power.

MINI supercharger pulleys are available in several different ratio’s, with the smallest, safe boost level pulley being produced by M7 Tuning.  Their supercharger pulley is 16% smaller than the factory pulley and is about as small as you want to go before making major additional internal and external changes to the motor.

Get in touch with us to learn how our brands are driving the future of ecommerce in the automotive aftermarket.